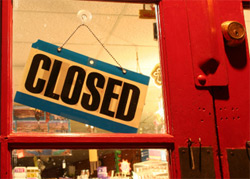 there is an immediate health hazard. As specified in Sections 113810, 114405 & 114409 of the California Health & Safety Code, "If any imminent health hazard is found, unless the hazard is immediately corrected, an enforcement officer may temporarily suspend the permit and order the food facility closed. Imminent health hazard means a significant threat or danger to health that is considered to exist when there is evidence sufficient to show that a product, practice, circumstance, or event creates a situation that can cause food infection, food intoxication, disease transmission, vermin infestation, or hazardous condition that requires immediate correction or cessation of operation to prevent injury, illness, or death."

There are several conditions that are considered to be imminent health hazards and could lead to a health permit suspension.

A health permit is suspended if the potentially hazardous foods in a facility cannot be held in a safe manner (i.e. temperature controlled).

Example: There is an electrical power outage to the entire food establishment and all refrigeration units are not working which prevents the ability to maintain proper temperatures of the potentially hazardous food.

A health permit is suspended if there is a lack of hot water throughout the facility. 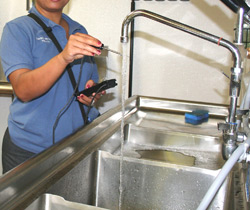 Example: Hot water measures at or below 99°F at all sinks in a facility in which food preparation and/or washing of multi-use utensils occurs.

A health permit is suspended if there is a lack of potable water throughout the facility.

Example: Due to a break in the water main, the water has been shut off and no water is available at the facility.

A health permit is suspended if there is a sewage system backup. 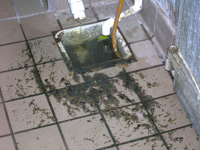 Sewage is observed to be overflowing anywhere inside the food facility.

Example: One or more floor sinks and/or toilets are backing up onto the floor.

Sewage is observed to be overflowing onto the property outside the facility and it is determined that the food facility is contributing to the overflow.

A health permit is suspended if none of the toilets within a food facility are available for employee use within the food establishment.

Example: None of the toilets in a food establishment, including common restrooms are in working order.

A health permit is suspended if rodent activity is observed 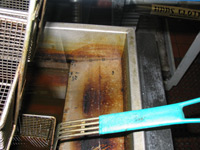 in the critical areas of the food establishment leading to possible adulteration of food product or any food contact surface.

Activity/evidence may include, but is not limited to, live rodents, rodents in traps, numerous fresh rodent droppings in multiple areas of the facility, urine, and gnaw marks on food packages. Rub marks on wall surfaces and around possible entry points may also be evidence of rodent activity within the food establishment but by itself does not constitute an imminent health hazard.

Example: Numerous fresh droppings observed on floor surfaces in more than one area of the facility, on food, or on food preparation surfaces.

A health permit is suspended

if live cockroach activity is observed in the critical areas of the food establishment leading to adulteration of food products and risk to public health. Other evidence may include, but is not limited to, spotting, egg casings, and dead cockroaches.

Example: Live cockroaches are observed climbing up the wall next to the 3-compartment sink. Definition of Critical Area: Any area of the food establishment where food is stored, prepared, or served. A critical area also includes areas where food contact items are stored. Additionally, a critical area is any area, piece of equipment, utensil, or food item where if cross contamination hazards exist there is an increased potential for food items or individuals to become contaminated posing an adulteration hazard to food items or an increased health risk to employees or customers.

A health permit is suspended if the quantity of other vermin present in the critical areas of the food establishment is such a magnitude (i.e., too-numerous to count) that the public's health is at risk).

Example: An infestation in the meat market was so bad and the flies were so numerous that you had to continually 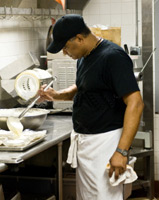 swat them away from your face.

A health permit may be suspended due to the potential of communicable disease transmission by one or more food facility staff. 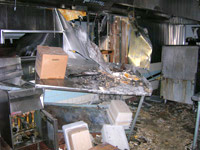 the facility has been compromised and/or contamination of the kitchen is to such an extent that an immediate public health risk exists. 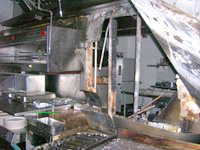 Example: A small grease fire has caused the fire suppression system to discharge, causing extensive contamination to foods and food contact surfaces in the kitchen.

A health permit may be suspended under any other condition not mentioned above which constitutes an imminent health hazard to the public's health that cannot be immediately corrected.

Examples: Establishment conducting a remodel in critical areas during business hours without the food being adequately protected. Severe unsanitary conditions observed throughout the facility.

When a health permit is suspended, it is not closed permanently. Once the imminent health hazard has been abated, and the conditions causing the hazard have been corrected, the food facility operator may then contact Environmental Health to request a follow-up inspection. A suspended, revoked or downgraded permit may be reinstated (or a new permit issued) if the enforcement agency determines that the conditions that prompted the suspension, revocation or downgrade no longer exist.